Best-selling, award-winning author Erica Vetsch loves Jesus, history, romance, and sports. She’s a transplanted Kansan now living in Minnesota, and she married her total opposite and soul mate! When she’s not writing fiction, she’s planning her next trip to a history museum and cheering on her Kansas Jayhawks and New Zealand All Blacks. You can connect with her at her website, www.ericavetsch.com where you can read about her books and sign up for her newsletter, and you can find her online at https://www.facebook.com/EricaVetschAuthor/ where she spends way too much time!

“Caudill’s debut is a fast-paced tale full of brave and brilliant characters, much skull-duggery, and conflict that will have you unable to tear yourself away.”

Don’t you just LOVE the word skull-duggery? Eep! I am so excited for this story to be so well received by Erica. Her books are wonderful, as you’ll see below. Thank you so much, Erica! (And I’m shamelessly putting the link to Counterfeit Love here if you would like to learn more or preorder it.)

Erica has written tons of novels and novellas, and I can’t possibly list them all here. Where there are series, I’ve only listed the first book, and then a few of my favorites from her. You can purchase them from any major retailer, but here is the link to her Amazon Author Profile where you can grab any of the titles you like.

Newly returned from finishing school, Lady Juliette Thorndike is ready to debut in London society. Due to her years away, she hasn’t spent much time with her parents, and sees them only as the flighty, dilettante couple the other nobles love. But when they disappear, she discovers she never really knew them at all. They’ve been living double lives as government spies–and they’re only the latest in a long history of espionage that is the family’s legacy.

Now Lady Juliette is determined to continue their work. Mentored by her uncle, she plunges into the dangerous world of spy craft. From the glittering ballrooms of London to the fox hunts, regattas, and soirees of country high society, she must chase down hidden clues, solve the mysterious code her parents left behind, and stay out of danger. All the while, she has to keep her endeavors a secret from her best friend and her suitors–not to mention nosy, irritatingly handsome Bow Street runner Daniel Swann, who suspects her of a daring theft.

Can Lady Juliette outwit her enemies and complete her parents’ last mission? Or will it lead her to a terrible end?

Best-selling author Erica Vetsch is back with a rollicking, exciting new series destined to be a hit with Regency readers who enjoy a touch of mystery in their love stories. Fans of Julie Klassen, Sarah Ladd, and Anne Perry will love the wit, action, and romance.

He’s doing what he can to save the Prince Regent’s life . . . but can he save his new marriage as well?

Evan Eldridge never meant to be a war hero–he just wanted to fight Napoleon for the future of his country. And he certainly didn’t think that saving the life of a peer would mean being made the Earl of Whitelock. But when the life you save is dear to the Prince Regent, things can change in a hurry.

Now Evan has a new title, a manor house in shambles, and a stranger for a bride, all thrust upon him by a grateful ruler. What he doesn’t have are all his memories. Traumatized as a result of his wounds and bravery on the battlefield, Evan knows there’s something he can’t quite remember. It’s important, dangerous–and if he doesn’t recall it in time, will jeopardize not only his marriage but someone’s very life.

Readers who enjoy Julie Klassen, Carolyn Miller, and Kristi Ann Hunter will love diving into this brand-new Regency series filled with suspense, aristocratic struggles, and a firm foundation of faith.

Seven brothers must marry within 1874 or lose their inheritance.

Meet the seven Hart brothers of the 7-Heart ranch in central Texas. Each man is content in his independent life, without the responsibilities of a wife and children—until their father decides 1874 will be the year his grown sons finally marry, or they will be cut from his will. How will each man who values his freedom respond to the ultimatum? Can love develop on a timeline, or will it be sacrificed for the sake of an inheritance?

Love at Last by Erica Vetsch
When her former patient, Confederate officer Bowie Hart, shows up on her doorstep, Elise Rivers agrees to his marriage-of-convenience proposal. But as she gets to know her scarred and taciturn new husband, she realizes she has a chance to turn a marriage-of-convenience into the love of a lifetime, if only she can convince Bowie that he is worthy to be loved.

No One Is Too Tough to be Loved
Join seven Texas Rangers on the hunt for a menacing gang, who run straight into romances with women who foil their plans for both the job and their futures.

Guard Your Heart by Erica Vetsch
When Constance Spanner witnesses a murder, Branch Kilborn is tasked with protecting her until she can testify against Cass Markham. This is the Ranger squad’s chance to abolish the Markham gang once and for all, but Branch soon finds that protecting Constance has become about more than just the job. 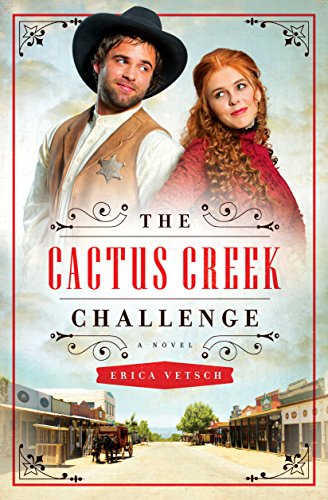 Anything he can do, I can do better. At least that was what Cassie Bucknell thought before she pinned on Ben Wilder’s badge and took to patrolling the streets of Cactus Creek, Texas. Cassie has been in love with Ben since primer school, but Ben treats her like a little sister. When they are picked to swap jobs for a month as part of the annual Cactus Creek Challenge in their Texas hometown, the schoolhouse is thrown into an uproar, the jail becomes a temporary bank vault, and Cassie and Ben square off in a battle of wills that becomes a battle for their hearts.

Leave an encouraging note for Erica Vetsch in the comments. This writing journey is rough, and I’d love to bless her as much as she has blessed me.