The Lost Lieutenant by Erica Vetsch 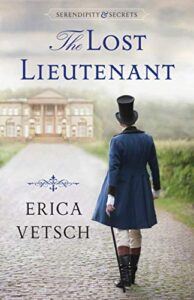 The Lost Lieutenant by Erica Vetsch

Fans of Regency and Marriage of Convenience stories will be delighted by this tale of a hero — who can’t remember the event that made him a hero — and a woman with her own secrets united by the Prince Regent’s wishes. I have been eyeing this book for months but other reading commitments kept it sitting on my TBR pile. I have finally settled into a routine of evening reading, and this book was my first pick.

Guys, I really enjoyed this one even more than I expected, and I had high expectations. I loved the mystery, the complex connections, and oh my goodness, the relationship development between Evan and Diana. They both had so much to learn in those early days, and Erica Vetsch handled it so well. This was the type of story that shows marriage as it can really be, not all rainbows and butterflies. Watching these two learn each other’s strengths and to play off of them was so heart-warming. I loved this story so much, I went ahead and bought the second book and read it as soon as it arrived in the mail. (So guess which one will come as my next review. Tee hee hee.)

I highly recommend this book to readers of the Regency era, marriages of convenience, and complex plots mixed with danger and intrigue.

He’s doing what he can to save the Prince Regent’s life . . . but can he save his new marriage as well?

Evan Eldridge never meant to be a war hero–he just wanted to fight Napoleon for the future of his country. And he certainly didn’t think that saving the life of a peer would mean being made the Earl of Whitelock. But when the life you save is dear to the Prince Regent, things can change in a hurry.

Now Evan has a new title, a manor house in shambles, and a stranger for a bride, all thrust upon him by a grateful ruler. What he doesn’t have are all his memories. Traumatized as a result of his wounds and bravery on the battlefield, Evan knows there’s something he can’t quite remember. It’s important, dangerous–and if he doesn’t recall it in time, will jeopardize not only his marriage but someone’s very life.

What I loved: The relationship development between Evan and Diana is so fascinating. I love the push and pull to learn to trust each other with their darkest secrets. It was probably one of the best romances I have read to really depict those struggles realistically and in a way that also makes you fall in love with the characters.

Favorite Character and Why: I have to say I really loved Evan and Diana equally. In fact, they almost seem one character–just like any husband and wife are one in Christ–and it wasn’t because they seemed the character. They just belong together so well that I can’t separate them in my head as liking one more than the other.

Hearts of the Secret Service